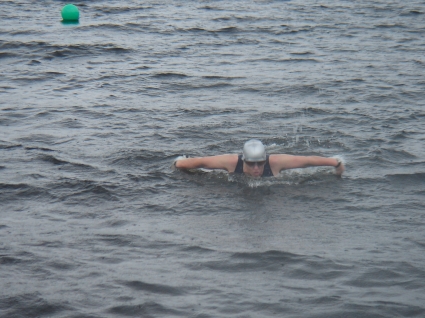 “That’s an endurance feat in its own right”, commented a canoeist at the evening reception of the Irish Long Distance Swimming Annual Lough Erne Championship. His question to me had been how many strokes had I done in my latest world record butterfly swim! This prompted my thoughts, as it was, indeed, a very interesting one.

I’d just spent 5 hours 50 minutes enduring my favourite stroke, the butterfly on this 10.5 mile stretch of waterway connecting Upper and Lower Lough Erne. Until the 5th 5th August, it had only been swam frontcrawl, maybe breastroke, but not the most arduous stroke, butterfly…that is, until, I ‘the madfish’ came along!

After calculating my stroke rate in a minute, I was able to answer his question. I’d done approximately 10, 800 strokes during my latest swim exploit! No wonder there’s a slightly dull acheing in my shoulders today!! There’s good reason for it!!

The swim commenced on a slightly overcast morning at around 10.15am, at Carry Bridge, in Ireland’s county of Fermanagh, the north. Along with ten other swimmers, we entered the water and began on the sound of the starter’s whistle.

For those of you not familiar with Lough Erne, the total distance from the end of Upper and Lower Lough Erne, is around 52 miles. This distance has never been swam before…food for thought!! The two loughs (yes, that’s how it’s spelt here) are joined by a 10.5 mile waterway, that weaves in and out, and around. Many a time, I thought I was swimming into a pile of rushes and water weeds! Alas, there was a small opening through which my accompanying canoeist, George, and myself, could pass through.

“This is the Irish equivalent of the Manhattan Island swim I attempted last year,” I thought to myself half way along the course, only this time I’m not going to get pulled from the water by the organisers, like last year. The Americans and their ‘fear’ of storms!! The day of the Lough Erne swim was never going to produce those circumstances. The conditions were very favourable, with some current and breeze coming over the water at various parts. “The difference with this and Manhattan is its scenery. Replace the New York bridges with sheep and cows, and lovely greenery of fields and hills (and the odd country smell (!) and you get the picture. The water over in Ireland is of far superior quality, though a touch colder at 62 degrees compared to the 75 over there that I encountered!

Regular ‘feeding’ every hour, a focused mind and the periodic conversation with my super canoeist of the day, helped pass the time of day, until I reached the finishing end at Enniskillen leisure centre, to the applause of the crowd. The local BBC man was there, so I’m sure he got some footage of the ‘madfish’, hopefully not splashing him, as I finally touched the jetty. It was also a pertinent date for me…four years ago on

I was of course, delighted to have created a new record at Lough Erne and again, more money for charity. I’ve got one more butterfly swim remaining in September for this year. However, before that I have my 6 Way record breaking swim with my relay team up in Lake Windermere, Cumbria. This will be in aid of Brian House Children’s Hospice.

In the meantime, if you’d like to donate to this and my ‘butterfly’ tour, please contact me on 07941 467291.Your support out there is always greatly appreciated and make my swims even more worthwhile.
Loughborough Echo 08/06