2007 – The Lough Erne Challenge – another record for Julie 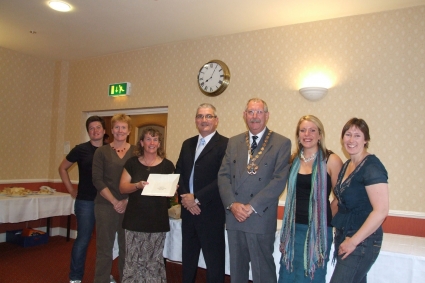 Last year it was butterfly in the UK’s lakes and lochs, but this month, Lough Erne in County Fermanagh, Northern Ireland, became the scene of a new venture – the challenge was 50 miles through some of Ireland’s scenic waterways, beginning at Crom estate in the Upper lough and finishing at Belleek on the Lower Lough, just outside the famous Pottery.

“The idea came to me after I became the first person to swim butterfly in the 10.5 mile ILDSA (Irish Long Distance Swimming Association) in August 2006. This was through the waterway from Carrybridge to Enniskillen. I took a cruise the day later on the Upper Lough and the ‘challenge’ was born! I put the idea to Billy Wallace, President of the ILDSA last September and it beacme a reality. The Challenge was organised jointly by Fermanagh District Council and supported by the RNLI and the PSNI, who were present on the pilot and safety boats plotting a course through the many isalnds (Erne has 156 islands, though we didnt go round all of them!!) on Lough Erne.

In this latest challenge, Julie once again led an intrepid band of females, all with impressive track records. The rules for relay swimming are simple – six swimmers, taking their turn in the water to swim for an hour at a time, in designated order until completion of the swim.

THE DAY: Julie tells the story…

“After briefing of officials and swimmers at Share Holiday Village, Lisnaskea, the team put their heads down to get the last bit of ‘kip’ for the next two days they would hardly be getting any! On a bright and sunny morning, (thankfully considering all the floods Great Britain and Ireland were experiencing), we boarded the boat and set off for Crom Castle, the starting point of this inaugural swim.

At approximately 8.10am on Tuesday 26th June, 2007, I was helped ashore in the RNLI rib to the slipway. Following a quick television interview with the BBC, I entered the lovely fresh water of the open lough. Incidentally, the water temperature was 15 degrees throughout, compared to the normal pool temperature of 28 degrees!

On the start of the whistle, I settled into my stroke – this time the front crawl – I was asked if we were doing butterfly, but I smiled and replied, ‘we’re aiming to get to Belleek in the quickest possible time!!’

My first hour soon went by and before I knew it, I saw Pip dive in (these ex-pool swimmers enter the water so gracefully!), Soon she pulled alongside, until the observers signalled her, and she took over…and sped away.

Although there are five hours between getting in and out, the time goes so quickly, especially when the temperature begims to drop, the weather changes, the winds and waves set in. Those in the team who’ve done this before know only too well! For the three newcomers, Nuala, Mo and Rose, it was their first experience of swimming during the night.

The first rotation went ‘swimmingly’; laughs and smiles all round, and much communication and banter was had by all including the flotilla of boats accompanying our team. Suzie and Derek, the two canoeists, did a ‘storming’ job, taking it in turns every two hours.

To give the readers an idea of the geographical layout of this challenge, the Upper Lough is narrower and joins the Lower Lough by a waterway. I estimated that the width of the Upper Lough at the widest point is 8-10kms across!

And ‘to be sure, to be sure’ as the Irish say, we started this more unpredictable part just as the light was beginning to fade. However, the ‘girls’ rose to the challenge. Despite Nuala finding the shallow part of the lough (the canoesit dipped her paddle in to see that the water only came up to half the paddle!!), Mo was able to take over from her about 11.10pm.

The safety of the swimmer is paramount throughout and on the night swim the ILDSA had thought of everything. Each boat was illuminated and each swimmer had attached a light stick so they could be seen in the dark. Mo absolutely ‘loved’ her night stint, although Rose was less enthusiastic, especially as the wind blew up kindly for her!!

Nevertheless, she battled confidently throughout – great training for her English Channel attempt next month!

The highlight of the day (there were so many really), but I have to pick one out…this was our fan club, when the ‘groupies’ joined us to swim on part of the lough.They’d seen us on the TV, as it was receiving loads of media attention from both stations, more I’m told than any sports event that’s taken place there, including the water ski wold championships. At the time this group of swimmers joimed us, Rose was swimming, but alas, none of the groupies could catch her. Way to go!!

Originally, we’d estimated that the 50 mile challlenge would take us about 25-30 hours. However, depsite the conditions worsening overnight, as dawn came, the waters smoothed out and the waterway became narrow once again. Would Mo make the final touch? No, Rose had to dip her toes again, though only for around 10 minutes. The team had swam so fast that all the welcoming parties, including the TV were still in bed!!

At approximately 6.27am on Wednesday 27th June, Rose reached out her hand to touch the finishing pole. Cheers rang around the quiet sleepy town of Belleek. It was our cries of excitement and the noise of three other unexpected observers…a couple of donkeys and a goat, who ‘eey awed’ their congratulations to us!! The smoke of Peter’s flare heralded the end…new inaugural record of 22 hours 12 minutes., the first ever Lough Erne Challenge had been completed, an historic moment.”

Indeed, this swim of ours is to be the benchmark to challenge other relay swims from all over the world to come to Lough Erne, to try and beat the time set by Julie Bradshaw

As usual, Dr. Julie Bradshaw MBE is raising money for Briuan House Childrens Hospice. If you would like to make a donation, pleae contact Julie on 07941 467291

However, there’s plenty of time to make your donation. Next month, Julie will again be leading her team to icy waters, this time on Lake Windermere, Cumbria where they will attempt to become the first ever to complete a six way swim, a total distance of around 66 miles.