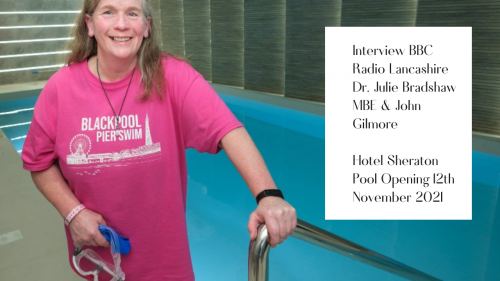 FAMOUS faces from the world of professional swimming made a splash at the launch of a new £400,000 pool at a Blackpool hotel this week.

Hotel Sheraton unveiled its refurbished leisure facilities in memorable style – by recreating the multi-award-winning John Smiths Bitter TV commercial from 2002, with the help of sporting greats.

Central to the occasion was a reprise of the iconic voiceover by former BBC swimming commentator Hamilton Bland who will also be joined by Olympic diver Hugo Ordoñez and Blackpool-born World Record Marathon swimmer Dr Julie Bradshaw MBE for the unique event.

At the age of 15, Julie became the fastest British Junior to swim the English Channel. She went on to earn a host of swimming titles and world records – including in 2002, a Butterfly solo smashing the previous Channel swim record by over nine hours. She has also raised thousands of pounds for charities and, in 2006, was awarded an MBE for Services to Swimming and Charity and an Honorary Doctorate from Loughborough University for the same.

She is also the organiser of Blackpool’s annual 1.6-mile Pier to Pier swimming event.

Dr. Julie Bradshaw MBE, who now works as a successful Business/Mindset Coach, Psychotherapist and Life Coach, was on hand to cut the ribbon at the official opening ceremony at the hotel, on Friday. (November 12th).

She said: “I am delighted to have been asked to open the pool at the Sheraton Hotel. Having begun my own swimming career at a very early age at a hotel pool, I know only too well the importance of swimming. I am sure it will be greatly appreciated by the guests.”

The re-enactment also featured Mexican Olympic diver Hugo Ordoñez, who has travelled the world with his diving shows. At the age of 15 he was the first junior high diver to perform a back-handstand with one-and-a-half somersaults from 25 metres. Hugo, who now considers himself a ‘Fleetwood lad,’ is currently a FINA judge for all the British national championships.

Known as ‘The Voice of Swimming,’ professional swimming coach Hamilton Bland, from Lancashire, commentated on every aquatic event over 23 years for the BBC, including six Olympic Games, but is probably best known for his voiceover work on the original John Smiths TV advert in 2002 featuring comedian Peter Kay as one of the entrants in an international diving final.

After seeing his rivals perform breathtaking manoeuvres, Kay’s character opts for the ‘running bomb’- a feet-first splashdown into the water which earns him maximum marks and the accolade of ‘Top bombing’ from the commentator.

It’s a chapter ‘Hammy’ Bland said he looked forward to revisiting at The Hotel Sheraton.

He recalls: “On my way down to Soho for filming for John Smiths, I wrote the commercial for them in 23 minutes. My kids couldn’t care less about my 23 years in BBC television but they thought the Peter Kay advert I’d written in 23 minutes was very exciting. It gave me a lot of street cred with them at the time. This is a very fitting way of marking the new facilities. Blackpool has a history of swimming pools including The former Derby Baths which closed in 1990 but was world famous in its day. This is going to be a fun occasion.”

Guests at The Sheraton and nearby Elgin Hotels can now take advantage of the new-look 9x4m pool and six-person jacuzzi and seating area plus changing rooms, showers and lockers. The premium facilities will also be accessible for hotel staff before opening to guests at 7.30am each day.

The award-winning Sheraton, along with The Elgin Hotel, on Queens Promenade, are run by sibling hoteliers Nigel Seddon and Liz Brown. The work marks the latest phase of their refurbishment plans which were halted by the pandemic.

Liz Brown, Managing Director at the Sheraton for six years, said: “The builders started in January 2020 and then downed their tools on 19th March at the beginning of the first lockdown. Work was then on and off for the next 20 months as the hotel opened and closed during the various lockdowns. The build was also delayed by the shortage of specialised equipment, due to Brexit, so after nearly two years we’re delighted that the project is finally complete.”

She added: “Of all the refurbishment projects we have carried out over the last five years, this is the one I am most proud of. The team behind it have created the most beautiful pool which is a great asset to the hotel and a wonderful benefit to our guests and staff.

“Thank you to the hotel guests who have been so understanding and patient about not having a pool as promised due to delays.”

Anyone wanting to stay at the Hotel then please visit www.hotelsheraton.co.uk

More photos of the amazing event can be seen on the photo gallery. Please click here to view.

Coverage in the media was wide spread. Here is one of the links for you to visit: