From Windermere Charity Swim to launch of Swim School 2015 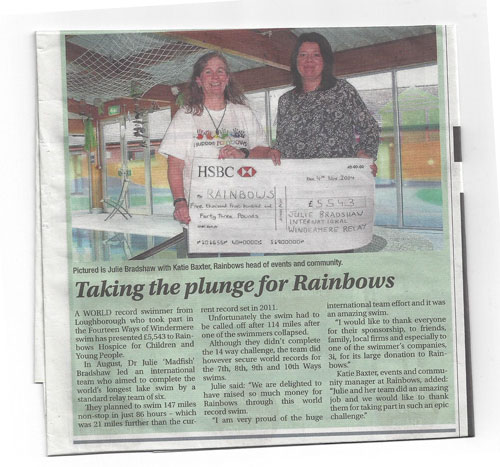 Dr. Julie Bradshaw MBE is proud to announce her continuing support for Rainbows Children’s Hospice with the launch of her new swim school at Get Set 4 Swimming

Last August, Julie led an international team when they attempted to swim the world’s longest lake swim on Windermere. They broke world records for 10 lengths of the lake and in the process raised over £6100 for Rainbows (link to previous blog about this swim on main web).

Recently, Julie visited the hospice and Katie Baxter received the cheque on behalf of Rainbows. It was even more exciting since in January 2015, Julie is delighted to be fulfilling one of her life-long goal to start her own swim school under Get Set 4 Swimming (link to new web homepage).

Of this part of her business, Julie nicknamed ‘Madfish’ said, “I cannot wait for this to happen. The best thing about it is that in teaching both children and adults to swim, I will be raising money again for rainbows, since I am donating part of the proceeds from the swim school to Rainbows who I have now been supporting for over a decade. Classes will be for all ages and abilities and will follow the ASA National Swim Plan.”