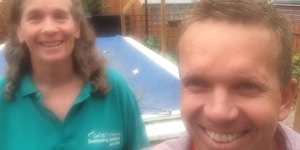 Australian based, Mark Sowerby is in training for his English Channel swim in August 2015. He has enlisted the coaching services of Dr. Julie Bradshaw MBE and has been writing his own bog about his forthcoming swim attempt which he hopes will raise thousands of dollars for Starlight Children’s Foundation in Australia, which helps many sick children.

Mark saw Julie back in September with another visit in December where she watched him swim. Mark begins in his blog:

“At Julie’s ‘Endless Pool’ after meeting to plan my English Channel attempt in August next year. Just did a quick swim for her to check out my swim stroke…”