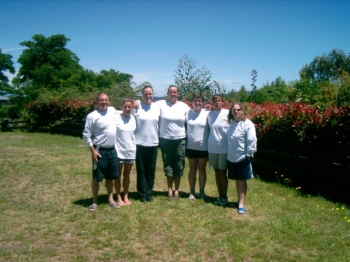 It is a wonderful feeling to get any world record; this one was no different. On Tuesday 6thJanuary, after just over 33 hours and 33 mins in the water, the ladies team in which I was swimming, stepped ashore at Lake Taupo. The total distance was 120 kms, a Triple and a first swim of New Zealand’s largest lake (40km one way).

A reporter greeted me on the beach after the swim and asked us the question, ‘Why?’

My answer to that is simple; it is a challenge and one that had never before been done. It had been swam two ways by Philip Rush (New Zealand), the fastest guy to have achieved a Triple solo swim of the English Channel under the auspices of the Channel Swimming Association in 1987.

‘Triple Taupo’ is my 18thworld record to date and it goes down in the record books as the longest relay swim ever recorded. Back in 2005, we had achieved a Triple Loch Ness relay swim of 67.5 miles (108kms). Unknown to me, this was a record. I only became aware of it when one of the swimmers husbands noticed that a team of 50 swimmers (each doing 2km each!!) had gone in the record books as the longest ever relay recorded at 100km.

So it was fabulous to know that Triple Taupo had beaten my own record!! The idea was borne back in 2004, after my Ladies Triple Relay swim of the English Channel. A British friend who lives over there, had told me about this amazing lake, so it had to be done!! And 2009 was the year for it.

Having been forced out of the water for a year because of my debilitating fish tank granuloma infection in 2007-8, it was exciting to get back in the swim and start planning ahead. I was in contact with another English Channel swimmer in Australia, Penny Palfrey. And the preparation and organisation began!!

Whilst it was my intention to only get a ladies team organised, Penny’s husband decided that he would get involved himself, and so set about pulling a team of men together. Although initially my team was mainly from the UK, due to the long time it took to organise boats the other end, some members had to drop out and thus the contingent from abroad came on board thankfully. Even with two weeks to go, one swimmer was struck with illness, which left us with 11 swimmers. Thus, the ladies had the standard team of six swimmers: myself (UK), Lucy Roper (UK), Penny Palfrey (AUS), Michelle Macy (USA), Barbara Pellick (AUS) and Heather Osborne (NZ). The men’s team swam with five swimmers – Steve Junk, Stephen Spence, Chris Palfrey, Dougal Hunt (all AUS) and Mark Cockcroft (NZ). This meant that the faster swimmers got more rotations, and hence were able to use this to their advantage.

On Monday 5thJanuary 2009, we set off at 2am to get to our start point on the lake. There were two boats accompanying us which added an extra safety factor to the swim. I can honestly say the conditions couldn’t have been better. I have never before been on a swim with the water so warm and calm. Just perfect!! You also have to remember it is summer over there and believe me, even the roads had been melting due to the heat. For myself and Lucy, being used to much colder temperatures (5 degrees C in Loch Ness!!), it made a very pleasant change.

The first swimmer in the water was Penny and she set the pace. Steve set off for the ‘boys’. We had decided to order the swimmers according to which side they breathed on, and hence, which side of the boat one had to be ‘taken over from’. Speed was also taken into account, though in my experience of very long relay swims, everyone plays a big part; it is not just about how fast you can swim out there; it’s about keeping that going, swimming at night, overcoming any obstacle along the way and being with your ‘team-mates’.

Michelle, another Channel swimmer was next in and she kept up the storming pace. I have to remember her part of the swim as each time she had a photo in a different swim cap for the people back at home!! Neat eh!!

For those readers not aware of how a relay works, let me explain that each swimmer swims for an hour in rotation until completion of the swim. Rules state that the ‘new’ swimmer has to take over from the back. At night time light sticks are worn on the costumes to ensure the swimmer is seen in the water. Whilst swimming beside the big boat in the daytime, during the night hours, Philip took out the inflatable and we swam aside that. It really is a master piece of organisation, and of course, a lot of fun. It is so different that solo swimming when it is just you out there swimming against the elements.

Don’t get me wrong! Relays are far from easy. Because of all the swims I’ve done, people have commented that it must be easy for me. Quite the opposite!! Imagine swimming, then getting out, drying off, feeding, mentally getting ready for the next stint, sleeping (or should I say trying to sleep!!)…I find that even though there are four hours in between, the longer the swim goes on for, the shorter the rest seems to get. Stiffness can set in…yes, the deep heat massage cream came out with one of the swimmers, and whilst the water did chop-up a little leading to the night hours (the ladies did gain some distance over the men at this time), overall the conditions were fantastic.

To write about the whole event would take far too long. Suffice to say, by the time it came to my swim, I was just so pleased to be in that water again, my first time since my Six Way Windermere Relay in August 2007 (having been forced out in 2008 due to fishtank granuloma, a rare debilitating infection)

To jump in and get into my stroke, was awesome…just no waves for me to be challenged by this time, though after a year confined to pool conditions, probably it was a good job. However, I do like a bit of wave rolling and bumpiness to overcome. My first swim was soon over so I rested for my next.

In this world things are sent to test us, and this was no different. As I ate to restore energy, I felt a crack and ouch, part of my tooth had come away. I wouldn’t mind if it had been something hard; no, I was only chewing a soft jaffa cake!! What was I to do? Here we were in the middle of the lake. Then Philip helped out. Phoning from the boat he was able to get me an appointment that day, which was amazing. Only my dentist back home is usually so good at fitting me in so quickly. Thankfully the water wasn’t too cold, so the pain could have been much worse on my second swim of the day. We then left the team and sped ashore in the inflatable craft for my appointment. At least I got chance to sit for a while in the waiting room and have a short rest, before the kind dentist filled my tooth. Then we were off out to re-join the swim. That’s dedication the boatman and crew commented!!

By the time I returned, the teams had completed the first leg and were a good way down the lake. Lucy for once didn’t have to land; it was Heather for the girls. All the swimmers swam exceedingly well and glided comfortably up the lake for the second leg turning. This time it was myself; I can only describe it as rather eerie the other end, total pitch black and not able to see further than a foot in front. Feeling my feet on the ground felt ‘weird’; yes, a swimmer has to land by walking ashore and clearing the water before commencing the return journey.

And so we all continued. The sun shone and it all made for a glorious day of swimming. Finally, after many strokes and experiences shared by all, Heather walked ashore at Taupo. This signalled the end of the swim which had taken us 33 hours 33 minutes. What was also amazing was that both teams that set out, despite slightly differing courses at times, and the speeds of the swimmers, finished within a very short time of each other. Congratulations to all.

As usual, I am raising money for charity, Rainbows Children’s Hospice in the East Midlands, and Brian House Children’s Hospice in Blackpool, my town of birth. If you would like to sponsor me for this event and for my next Channel Relay WR swim attempt in July 2009 (using butterfly this time!!), please contact me on my website: