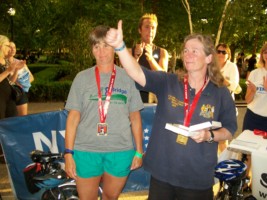 Dr. Julie ‘Madfish’ Bradshaw MBE has completed another ‘milestone’ in the history of long distance butterfly swimming. On Saturday 16th July 2011 she completed her latest swimming feat with her favourite and hardest stroke, the butterfly circumnavigating the 28.5 miles course around Manhattan Island, New York in a fastest ever ‘documented ‘ traditional butterfly  * time of 9 hours and 28 minutes. Her observer Hsi-Ling allocated by NYC was there to document it and ensure all was done correctly. Julie received from the lead member of NYC that evening her medal and trophy showing her ‘Top Female All Butterfly‘.

There is an acknowledged title in the swimming world, that of the Triple Crown ie. an elite group who have swam the English Channel (22 miles), Catalina Channel (22 miles) and Manhattan Island (28.5miles). Swimmers do this on frontcrawl, yet only two swimmers in the world have achieved two of the three on the proper traditional BUTTERFLY, Julie being one and Vicki Keith (Canada).

“I have been asked if Catalina is next on the agenda” said Julie. “Who knows…it hadn’t crossed my mind! I know Vicki has done both the Channel and Catalina though surprisingly, never had a go at Manhattan in her great ‘fly’ days. She told me in an email when I asked her ‘why’ that it was something she just had not done at the time.”

Dr. Bradshaw is currently resting for a few days before her next big one, The Humber, in the UK, again never been done and it will be her next world record.

So what about the Manhattan swim? The day started well with calm conditions at Pier A near Battery Park, New York. Julie was guided along the way by a boat and a kayak going first along the East River, then entering the Harlem River and finally the last tough 14 miles along The Hudson.

The butterfly ‘swim tour’ took Dr. Julie Bradshaw MBE past historic sights such as the Statue of Liberty, Manhattan and Brooklyn Bridge, Yankee Stadium and the awe inspiring sight of the huge George Washington Bridge a few miles into the Hudson

“One of the hardest parts of the swim was the heat; it was 75 degrees at the coldest and even 80 degrees in some parts. The sun was beating down onto my back and fortunately I covered myself in a high factor suncream. It did a good job as I wasn’t anywhere near as ‘red’ and burnt as I thought I would be,” Julie laughs. “There were strong currents along the way although for the first part it was calm. However, when I turned at the top with 14 miles to go, the wind blew up and I was fighting against huge waves to get to the finish. It was such an amazing moment to touch the finish buoy at the pier after 9 hours and 28 minutes in the water, finishing where I started out.”

This was the second time the ‘Madfish’ had attempted the swim. Lightning halted her bid in 2005 when no swimmer finished the race. She trained hard for the 2010/2011 year and came back and achieved her dream. The race itself was an inaugural invitation event that NYC Swim had put on in addition to the yearly solo race. Initially Julie had been turned down for the solo due to a crew late entry in the online application procedure. However, the organisers knew of Julie’s desire to complete this on butterfly and to become the first ‘documented’ female in the world to do so. The organisers  had told her this in 2005. And said they would organise a solo for her in the summer of 2011.

“I was phoned at Christmas by the lead member of NYC who told me my ‘solo’ had opened up a ‘can or worms’ and as a result they were putting on this inaugural event and if it went well, it would run in future years. It was great to think that this had come about from my conversation and would mean many more swimmers could do this in future years avoiding the disappointment of getting turned away due to insufficient places. My friend, who was with me and had been listening into the call with me, was as delighted as me!!

A few weeks further down the line everything was confirmed and I was set. My profile was added by the organisers to their website stating that whilst I was not the first person to have attempted it butterfly. Charles Chapman had in the 1980’s but had resorted to other strokes to finish as well stating that he had used his own style of fly, thus a non-traditional butterfly.

Whilst there had been reports of other swimmers circumnavigating the island on butterfly (1983. 1986 – reports incidentally revealed by the organisers after Sat 16th July), no one had swam faster than Julie, and certainly no ‘documented’ traditional style butterfly. The organisers in their email correspondence claimed that this was due to all strokes being categorised in those days as freestyle. Yet my butterfly English Channel swim and Vicki Keith’s butterfly swim of the Channel and Catalina Straits in the USA were put down in the books as butterfly and recognised.

In completing the swim then and from email updates by NYC sent out to their membership, they confirmed I would be the first female and hence first person (swimmer) ever to have swam the entire 28.5 mile course using only traditional butterfly. This would be a record, first* and indeed, ‘documented’.

To be certain, as I like to be certain of my facts, I did ask about this. The current organisers had been responsible for the running of  this swim sevent (MIMS) since 1993. Despite weeks of enquiring and prior to my swim they could not find any documentation saying that Chapman had done it. Even the guy who went on his boat was not supposed to have remembered what transpired. That is hard to believe – I am glad my observer (allocated by NYC) (Hsi-Ling) on Saturday July 16th knew!! Doing something like butterfly the whole way IS an occasion that cannot be forgotten.

You can imagine my elation therefore, when I touched that buoy at the end. The crowd clapped and applauded my huge effort. I had done it and completed another ‘page’ in my life.”

Having taken a few days break, Dr. Julie ‘Madfish’ Bradshaw is now back in the water training for her next UK swim, The Humber. If successful, it will be her 21st world record and on UK soil. Watch this space for the action!

Click on the links below for the action (You Tube)

After the swim Julie appeared in the media both locally and nationally.  Please click below to hear more

On July 26th 2011 Julie was asked  to appear on BBC Breakfast TV. The full interview is below on ‘You Tube’ as well as the shortened version form the BBC website.

WHAT DID VIEWERS SAY?

*NYC for simplicity will only claim to recognise the fastest male or female who completes the swim regardless of stroke. Other organisations such as the Channel Swimming Association do recognise all strokes and have official records for them (See Guinness World Records on Swim Records). In cases where the organising body say they cannot (for various reasons) other groups such as the IMSHOF, have issued certficates to recognise other strokes on available data.